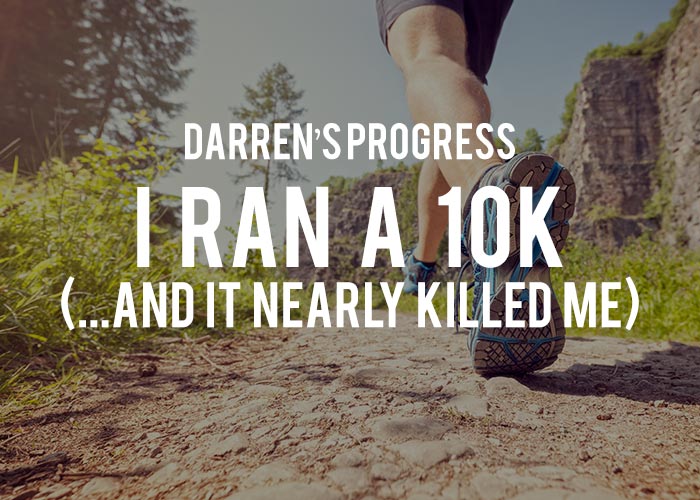 Getting started is tough. In my first blog post I made the decision to run – no matter how hard it was going to be. I’m overweight, unfit, and quite lacking in time, but I need to do this. For my health, for my mental wellbeing, for having an extra 20 years of life (with chronic knee pain, I’m sure!).

When I first started this challenge, the best I’d ever done was a 5k solid, and that was in perfect conditions – a bright Saturday morning with a breeze, with a small group of family who were better runners than I was. I kept pace for 5k, after which we mercifully walked. Since then I hadn’t been able to repeat such a distance myself, probably due to a combination of factors.

There is definitely a mental block when I run, something in my brain tells me to slow down, or stop, or that we’ve run far enough take a walk. On that 5k day, all I was focusing on was keeping pace with the group (and the various random topics of conversation) – there was no doubt, no walking, and no desire to stop. That day was my white whale, and ever since I’ve been chasing it.

Fast forward to last weekend, and I found myself in beautiful Swansea (my home town!) visiting family with my wife. My parents live in the wonderful Swansea Marina, and have stunning views day and night of the bay. From their place you can see all the way down Swansea Bay to Mumbles. In the photograph below, you’ve got the City in the foreground, with Mumbles being the edge of the land you can see stretching in the distance.

If you’ve ever been to Swansea Bay, you’ll know the Promenade is one of the greatest in the country. It’s a flat, completely tarmaced path that leads all the way from the City centre to Mumbles. Once it reaches Mumbles, it even becomes a rough-terrain path as it snakes over the hills in the distance and around the Gower Peninsula. But most importantly for me, it’s flat.

So last Sunday morning, before the sun had even risen, my wife and I donned our running gear and left for a run. We started just to the left of the Marina Tower, which is the big building you can see under construction in that photo. The distance from our starting point to the end of the Marina Promenade? 5.3 miles, just short of 10k. I’d never run something like this before, but I was determined to do it. I’d just bought myself a new fitness tracker the day before, and a new running jacket for the colder temperatures, so I was eager to test them out. At 6:30am, with cold hands and little light, we started our run.

I’m not going to lie, the experience was amazing. Not only had I captured the same feeling and determination of my 5k (my white whale), but I exceeded it. This was my hometown, these were my people, I was running on a wonderful path with absolutely spectacular views of the Bay to my left. We ran through parks, we ran through tree-lined areas, we dodged small sand dunes and we hardly went near the road (and what few cars were around!). We saw some other runners, nodding as we passed, and early rising walkers with their dogs on the beach. We even saw a fox looking thoroughly confused as to how it got onto the beach. The sensation was glorious. I kept checking my fitness tracker as we ran, and watched the miles climb.

By the time we reached half way, it was starting to dawn on me that I could actually do this! I started to get that runners high that you hear so much about, I felt wonderful, like I could do this every weekend. What few aches would appear would slowly go, and even when I started to feel fatigued, it felt like there was a greater will pushing me onwards. By about 3/4 of the way to Mumbles, I said to my wife that I knew my body was running on automatic now, past any point I had reached before, just putting one foot in front of the other. If I stopped running, I knew I wouldn’t be able to start up again. So we pushed on, and I removed all thoughts of stopping until we’d at least reached our goal.

In under an hour, we’d reached Mumbles! My enthusiasm was still there but waning, but we’d reached our goal and now had the daunting prospect of turning around and heading back! We ran around Verdi’s ice cream parlour and then started back, this time focusing on the Marina Tower in the distance that symbolised our goal.

Sadly, my efforts and determination had paid off too well – I could feel my body starting to reject the idea of running much more! Within a mile of running back, I had to stop. I told my wife to carry on (she’s a much better runner than I am!) and I stopped running. As soon as I did, I felt my knees buckle and I nearly fell over. I managed to walk to the sea-front wall and sat, and was completely overtaken by an overwhelming urge to throw up. For the first time in that run, I noticed my insides felt like they were upside down and in the wrong place, it was dreadful. After a couple of minutes sitting I felt somewhat normal, so got up and started the long walk back.

It didn’t take me much longer to walk home than to run, perhaps 30 minutes more. I passed many more runners and cyclists of all different ages and abilities, and said hello to each one of them (with varying degrees of reply, from cheerful greetings to outright ignoring).

After we both got home, the reward for completing my first 10k arrived soon afterward… a stack of American pancakes, Welsh bacon, and maple syrup. Today was a good day.