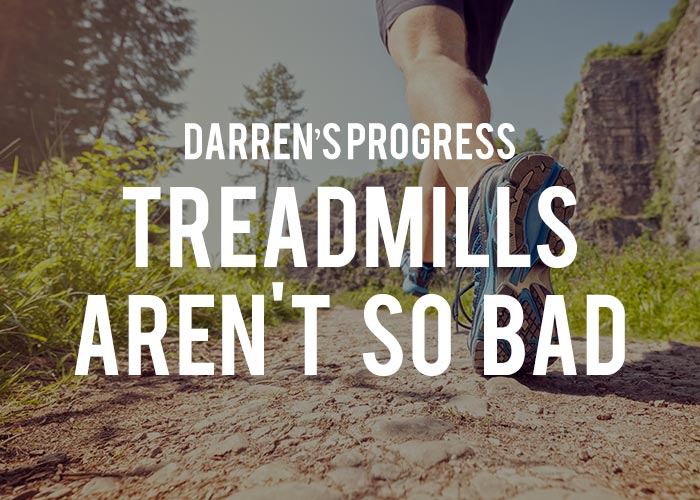 If there is one question that (in my limited experience) divides runners into two camps, it’s this: Do you prefer to run indoors or outdoors?

Anyone I’ve asked has usually given a strong response in favour of one over the other – I don’t recall one reply being ambivalent or saying both are fine. Perhaps this is an opinion that gets formed after some time and experience in running, and becomes cemented into your routine as fixed as which trainers you use.

After struggling to make time to go running, and with the nights progressively getting darker before I’ve even finished work, finding the oomph to go out for a good run is getting harder. One afternoon after chatting with an old colleague about various runs, I felt the bug hit me like it hadn’t for a while – I wanted to run.

Staring out of my office window into the darkness wasn’t particularly welcoming, and I remembered that gym membership I pay monthly which I hadn’t used in… forever. So straight after work I donned my running gear and drove (yes, I know, it’s kinda far away) to the gym. I wanted to try running on a treadmill, to see if it was any different to road running.

When I got to the incredibly packed gym (ah yes, this is why I stopped coming), I got onto the only free treadmill and set off on a flat run, no time limit, at 7kph. The first few kilometres flew by, and it felt great! I hadn’t run for about 2 weeks, but this felt amazing.

At 5km my enthusiasm started to wane. I contemplated calling it a day at 5, a respectable number. Besides, the wife was waiting at home and it was already 7pm. I looked to my left and saw a man well into his 40s trying his very best to run at a modest pace, sweat pouring off him. As strange as it sounds, watching him put in way more effort than I was putting in made me want to push harder. We exchanged a few words of encouragement (unheard of at the gym, I know), and I pressed on, pushing the speed up to 7.5kph. I was going to do it, and it was going to hurt, but I was going to push harder than I had before.

By the time 7.5km came around, I made a horrible realisation. My treadmill was only going to let me run to 7.5km and then it was going to stop! By this point I had already resolved to running 10km to match my last big run, and had no intention of having to fiddle with the treadmill to coax another 2.5km out of it. Sadly though, as I hit 7.5km, I was told to start cooling down, and the speed dropped. Resiliently, and with a few grunts of annoyance, I pushed the speed back up to 7.5kph during the cool off period, praying silently to the Gym Gods that after the cool off period ended, it would realise I wanted to continue and keep going.

Just short of 8km the treadmill reset itself, and slowed to a stop. My hard-fought progress on the screen was gone, and so were my chances for a celebratory selfie with the digital numbers indicating my achievement. Worse still, I had to stop running. At 8km, and stationary, my body wanted nothing more than to stop running. But no, I had to reach 10km, it was a matter of pride now. My running mate had already left with a nod, and some stupidly athletic gym bunny was sprinting to my right, and there was no way I was going to not finish the last 2km.

I poked the treadmill and set off again at the same speed. At 9km I was getting fatigued… sweat was irritating my eyes, my body was tired, I was hungry, my nipples were on fire, and it was getting late. I’d signed up to do a 10km in November, so I needed to finish this, just to know I could. The last half kilometre was counted down in my head, and the moment the counter hit 2.5km I pushed the cool down button and slowed to a very satisfying walk.

By the time I was done, the gym had nearly emptied. Clearly this was the time to arrive! I walked slowly back to my car, sweating, aching, but victorious. This won’t be my last treadmill run.