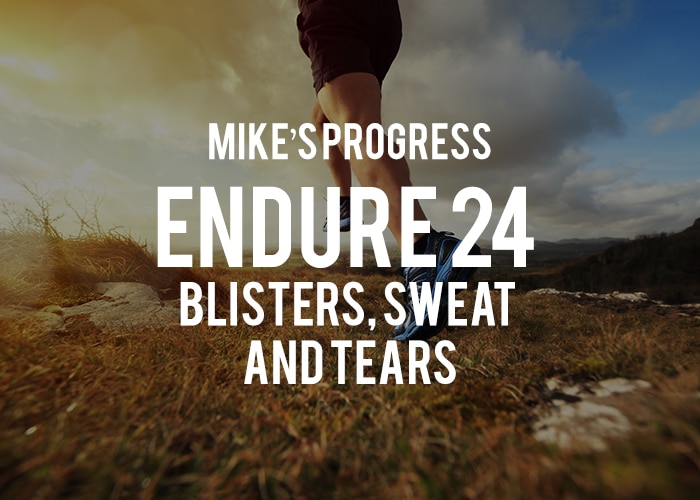 So yesterday I ran Endure 24 as a solo runner. 24 hours non-stop running / walking / limping around a 5-mile circuit. If you’ve been reading my blog before then you’ll know that I was aiming to complete 20 laps (100 miles) during the 24-hour period. Unfortunately, I only managed 16 laps (80 miles) but I did place 33rd in the race and I gave absolutely everything I could. Looking back at it today, unable to bend my right knee, multiple blisters and with swollen achilles on both sides I am proud of what I achieved and incredibly motivated to go back and do it all again!

The day started well, the weather was good and the atmosphere incredible. Endure 24 is often described as the Glastonbury for runners and it really felt like that – thousands of people, incredible comradery and excellent facilities. At the start line I felt pretty confident – I was fit, un-injured and determined. My daughter had made me a bracelet which I was wearing so I had extra incentive not to quit once things got tough. 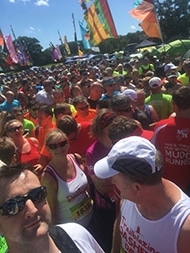 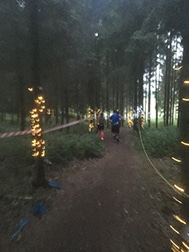 The first 5 laps passed without consequence. Some epic banter from the other runners and such a friendly event to run in – even the marshals were totally hilarious, cracking jokes and shouting encouragement all the way round. The course had a couple of scarily named features ‘the hill of no return’ and ‘heartbreak hill’ but in real life they were fine and it was a really beautiful place to run. I was averaging about 10 minute miles which was all part of the plan and I was eating small amounts of food every lap (a handful of m&ms, a pepperami, half a chicken wrap). I’d tried all of this food in training and this worked well for me. I was supplementing the food intake with a mix of water and an electrolyte supplement called Tailwind. All in all, I was feeling pretty good with 25 miles down…

The temperature then went up significantly for the next 4 laps. 20 miles in searing heat was taking its toll but I’d prepared for this, put plenty of sun cream on and just made sure I drank lots more liquids. I had a couple of pot noodles and some flattened coke to keep me going and it seemed ok. I was starting to hurt now but I’d done 9 laps (45 miles) so I was expecting that!

Then came the night section which is where things unravelled for me. I had packed two head torches but hadn’t checked the batteries properly so neither worked. This was a stupid, stupid mistake and I was really annoyed with myself. I had a charge pack for my mobile phone with me so I walked the 10th lap using my iPhone as a torch. To compound my problems it started to rain, gently at first but quite heavily at points. This made the trails treacherously slippery in places and impossible to run using an iPhone as a torch! This lap took me almost twice as long as the previous 9 and was a real psychological blow as I trudged round the course in the dark and wet. This put me 45 minutes behind my race plan but I was hoping I could recover this time when the sun came up and things dried out.

My wife Maddy was crewing for me and somehow managed to persuade the absolutely amazing guys from Silva (who had a stand there) to loan me a head torch for the rest of the race. This was a real boost – these guys had saved me! I was back!

I took stock of my position and decided it was too risky to run fast in the dark on the slippery trails but I had enough time to fast walk a couple more laps and then make the time up in the morning. In hindsight, I should have taken sticks for this kind of situation as they would have really helped me balance. Laps 11 and 12 were a slog – trudging through the rain and in the dark but I was in a good space mentally and had my headphones on, just getting through it. I had predicted that the second half of the race would be a lot slower than the first for my plan (10hrs for the first 50 miles and 14 for the next 50) so actually these fast-walk laps weren’t too bad.

Then came lap 13. I literally fell apart. Marathon runners talk about hitting the wall and I’ve been through that before but this was so much worse. My legs were agony, my feet felt like they were covered in blisters, I couldn’t think straight and I was slipping on everything. It took me almost 2 hours to complete this 5-mile lap. I tried to run through it and managed three steps before the shooting pain behind my knees was too much. I was staggering all over the trail. The sun was starting to rise and the rain starting to ease so I should have been feeling better but I was just getting worse. I completed the lap and tried to eat something but the food was making me feel sick and I couldn’t swallow anything without water to wash it down. There is a tent for solo runners at the start line where we keep our food and kit and some of the other runners were looking worryingly at me as I was staggering around the place. I realised at this point I was done. 65 miles in and I was completely done. I could barely walk let alone run any more, I couldn’t see straight and I kept retching to be sick. It was about 4:30am but I decided to phone Maddy to get some help. She turned up at the solo tent a few minutes later and tried to calm me down a little. She made me sit down and helped fix up my feet. My socks were drenched so needed to be changed and she helped fix the blisters on my feet and cover them with Compeed so I could walk easier. She also recommended that I go to the massage tent which I did. My feet felt a bit better but my legs were agony and the massage was relatively ineffective (I should have done that hours earlier) and I kept retching whilst lay on the massage table so they ushered me out pretty flipping quickly! I was also going mildly hypothermic and couldn’t stop shaking. This might sound a bit dramatic but is a real problem for distance runners and why many of the marathon races give you those metallic bath sheets to wrap yourself in. When you begin to run, you’re cold and as you run your body temperature rises and you produce heat, you get hot and begin to sweat to lose the heat you need to lose. But when you stop you actually need to retain heat and your core temperature is still elevated so you are still losing heat which is obviously made worse if you are in the cold and wearing shorts…
So, we ended up sat in the car with the heaters on full blast and me huddled in a massive woolly hoodie. 65 miles down and I was done. All I could think about was how much everything hurt and how I just wanted to go home. Pretty quickly I started to warm up and feel a bit better. Everything hurt but I was becoming a bit more rational, Maddy was looking through my splits and was telling me that I still had time and could still make the 100. Before I really realised it, we were back at the solo tent at the start line and she was taking my hoody off me and basically pushing me back onto the course. Once I was there I didn’t really have much choice but to run and so I just limped forwards and carried on. In no way was my continuation of the race down to me – this was all Maddy. She managed me so well and got me back on the course when all I wanted to do was lie down and sleep! If you ever do a race like this make sure you pick the right crew – they can literally save your race!

I realised I wasn’t going to make the 100 but I was determined to at least keep going. My legs were shot so I took some pain relief (please don’t do this as it’s really dangerous to take pain relief whilst running apparently!) I was going to have to tell everyone that I’d failed, including my daughter who’d made me a bracelet and everything. I started to well up a bit and think about quitting again. Then I pulled myself together and set myself a new target. 80 miles – that’s 3 marathons. 3 marathons in a day is a good number right? 3 more laps in just under 8 hours was definitely achievable. I couldn’t really walk let alone run but I could limp pretty effectively! So, I did. The last 3 laps I was averaging 28 minutes per mile! A spectator in the crowd shouted that I was walking like a zombie. He asked me how many laps I’d done and I couldn’t even get my words out to answer him. I was smiling a lot at people whenever they spoke to me because I couldn’t speak and I must have looked completely deranged! 7.5 hours of zombie limping later I crossed the line having completed 80 miles! It wasn’t the success I had been aiming for but it was something I could be proud of.

I look back at the race and I’m really pleased with those last 3 laps. I was in so much pain and absolutely ruined but I carried on anyway. I don’t think I would’ve gotten out of the car without Maddy but once I was there I managed somehow to keep moving. So, I did 80 miles and not 100 – who cares! I’d never run more than 50 miles before so this was a real achievement for me. There are no excuses, I tried it and I failed but I think I learnt some stuff and I also realised that I can keep going a long time after I want to quit! A massive thank you to Darren, Emma and Charlotte from the National Running Show team for their support on the day, Josie and Margaret for looking after my two kids, to all the amazing friends and family who were texting and calling me on the way round but mostly thank you to my wife Maddy for keeping me going when all I wanted to do was quit.

Next time (I’m definitely going to try again!) I will put a bit more distance into the training – my body just wasn’t ready for the stresses of 100 miles and I need to get some more 20s, 30s and 40s into the training programme. It’s only an extra 20 miles – easy right?! 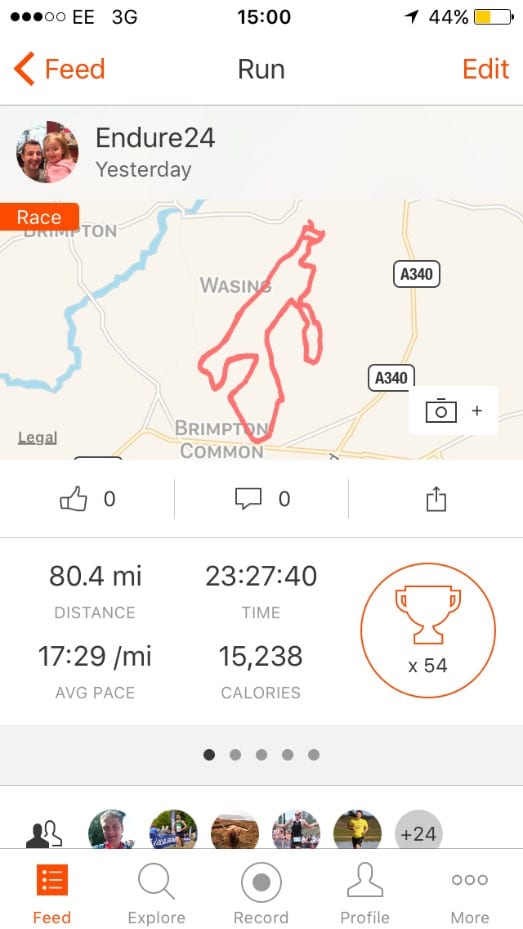