The National Running Show has confirmed the latest speakers lined up for its inaugural event at the NEC, Birmingham, on 20th and 21st January 2018.

Joining an already high-calibre group of speakers will be Susie Chan, Anita Bean and Ben Smith, each of whom are guaranteed to draw large crowds as they share their wisdom, experiences and tips at the UK’s first non-race affiliated expo solely for runners.

Susie Chan is a popular endurance runner who competes in some of the world’s toughest ultra-marathons and endurance races. She has completed the legendary Marathon des Sables three times, earlier this year won the Coastal Challenge Costa Rica in the Adventure category and is close to finishing all the World Marathon Majors. When she’s not running, Susie is kept busy commentating at races, featuring in brand photo shoots and events, undertaking kit reviews and maintaining her excellent blog and social media presence. Her bubbly personality and infectious enthusiasm make Susie a go-to source of inspiration for runners of all abilities.

Anita Bean is an award-winning registered nutritionist, health writer, internationally published author and champion athlete. She specialises in sport and exercise nutrition and is passionate about helping people to lead a healthier lifestyle through her books, articles, recipes and talks. At The National Running Show, Anita will be delivering practical nutrition advice that is both engaging and easy to understand, to help runners improve their performance in training and competition. Some runners will recognise Anita from her presentations at the Virgin Money London Marathon Expo.

‘The 401 Challenge’ runner Ben Smith is another speaker whose story is sure to touch everyone. This is the man who completed 401 marathons in 401 days in October 2016, raising over £330,000 for charity and earning himself a Pride of Britain award. Having suffered a mini-stroke aged 29 following years of bullying and physical abuse at boarding school, it was running that helped Ben to recover his mental and physical health. He is living proof that everyone should believe in themselves and wholeheartedly do what makes them happy. Ben has since set up The 401 Foundation which provides grants to individuals and grass roots projects that build confidence and self-esteem along with tackling mental health issues. 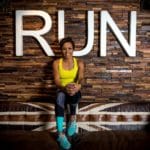 Susie, Anita and Ben join a first-class line-up of speakers at The National Running Show next January. The show will be opened by running icon Dame Kelly Holmesand feature an impressive programme of Olympic gold medal winners, globe-trotting adventurers and extreme endurance athletes. Other names to look out for include Jo Pavey, Elise Downing, Sean Conway, Russell Smith, Steve Edwards and Jenny Tough.

Mike Seaman, Director of Racoon Events, commented: “It is an honour to welcome Susie, Anita and Ben to The National Running Show. Their individual stories are sure to resonate with visitors to the show, showing them how it’s possible to achieve their targets and encouraging them to believe in their dreams. We have an incredible line-up of speakers, partners and exhibitors for the show already and it will be absolutely brilliant to have them all under one roof for the benefit of the UK’s runners in January”.