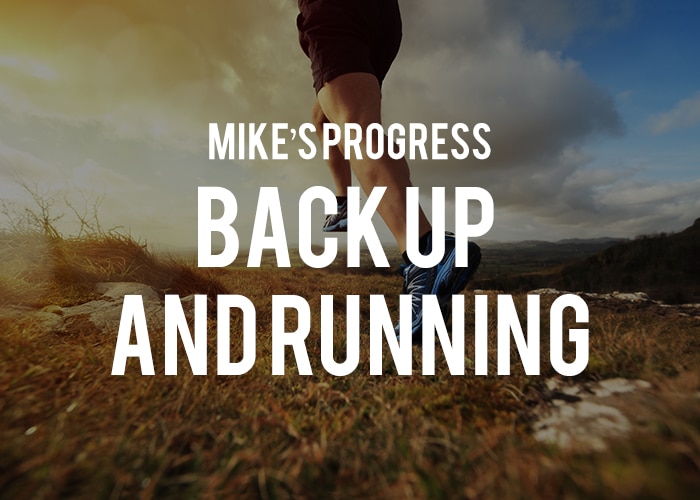 I didn’t really have target this month and was trying to ease back up again after taking a bit of a rest post Endure 24. I started the month with a cheeky 5 miler which I blitzed in 42 mins. It was so easy – I knew I could go faster and literally couldn’t wait until my next one – I was so going to smash it…

Two days later I’m practically sprinting down the stairs to get out. I’m going to batter that time today – watch me go! Unsurprisingly the predictable thing happened and I injured myself by being overcompetitive! I did run the first mile in under 8 minutes which is quite quick considering I’m a bit of a lumbering oaf (6’4 and 14.5 stone.) Then half way through mile 2, arms and legs flailing as I was gleefully sprinting up the trails like a deranged lunatic, I strained my calf and had to stop. I mean it was kind of inevitable but fun while it lasted! Note to self – must be less of an idiot in future and maybe take small steps!

This really is my problem with running – I think I can do absolutely anything but I lack the physique or the dietary discipline to achieve some of the things I want to. I’ve actually done some pretty good distances over the years but more through force of will rather than doing it properly. I mean I’m not going to change at all because I love my food and beer but at least I am self-aware ?

I had to take a few days off while my calf recovered and stayed at 5-mile training runs for the next week or so to gradually ease myself back in. From then on, July was a breeze – I was running 10 milers with no issues at all – easily clocking 9-minute miles or less. I also entered the hard as snails event by aat which I did in the raccoon costume and was hilarious (check out the race review on my previous blog). I usually run across some common land in Surrey and was getting really lucky seeing deer and all kinds of wildlife on my travel which is amazing. The miles were getting easier and I even threw in a couple of 12 milers towards the end of the month so I could keep the monthly miles above 100.

So here we are then – I’m running pretty good mileage and feeling fresh, enjoying my running and pretty happy. Maybe I should just stick at that, chill out a bit? I’m a bit conflicted – I love running and I find it therapeutic because it gives me some time to myself to be creative and come up with new ideas for work or to figure out how to deal with problems or stresses I might have. However, I also love running because I’m fiercely competitive and I really enjoy pushing myself to breaking point and then seeing if I can keep going.

I suspect I need to do both – keep the training light and chilled but also give myself some challenges to aim for. I’m conscious that I failed the 100 miles in 24-hour challenge so I’m pretty sure I’ll have a pop at that again soon as I HATE failing ? but maybe I’ll just do it when my legs are ready and not at a specific race as such.

Let’s see what August brings but I am definitely running with a smile on my face again! 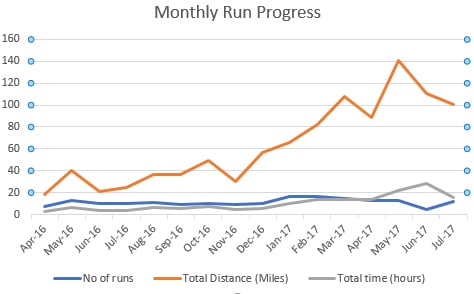