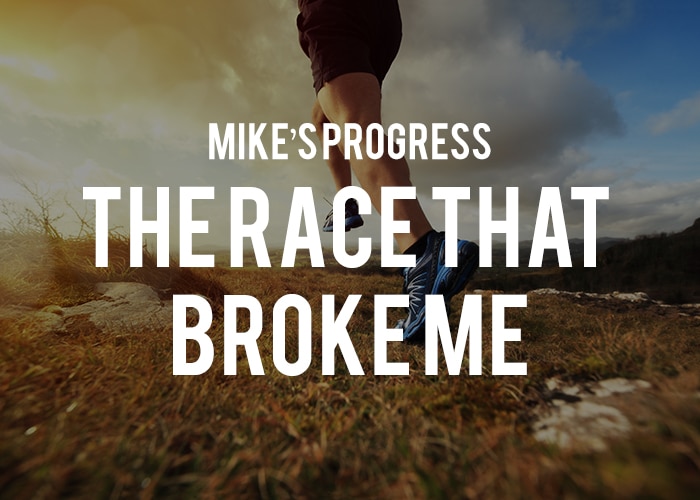 This weekend I completed the Birmingham International Marathon dressed as the Raccoon in 5 hrs and 39 minutes. This is the hardest race that I’ve ever done and it took every ounce of energy I had. It’s no reflection on the course that I struggled so much – but when you are dressed like this guy and it’s 20 degrees, things get tough: 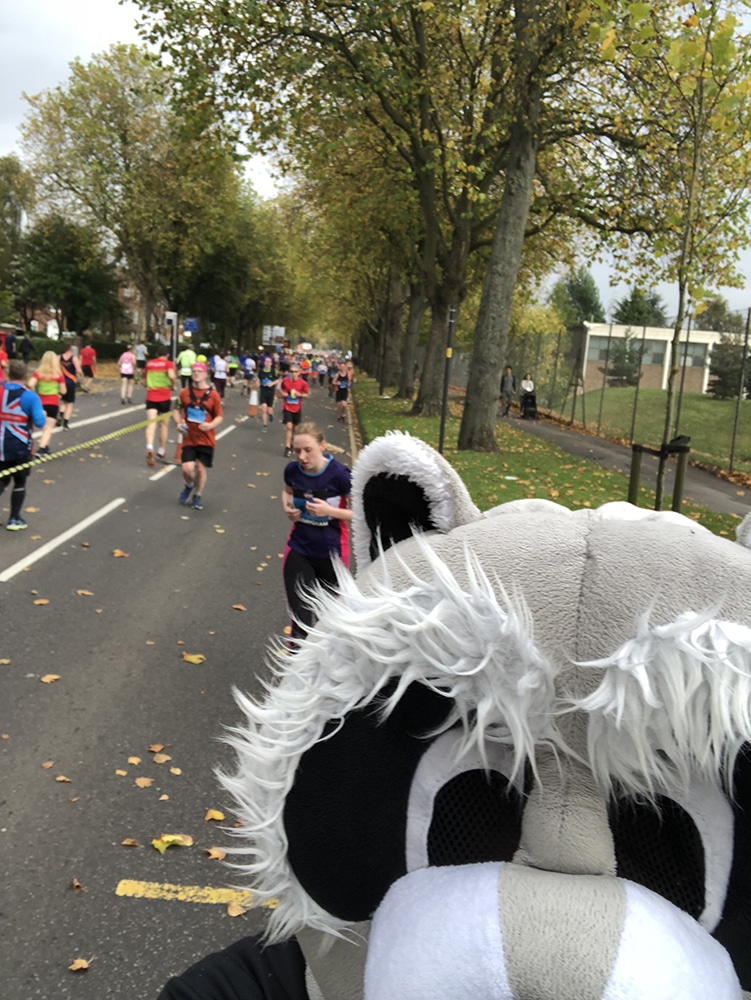 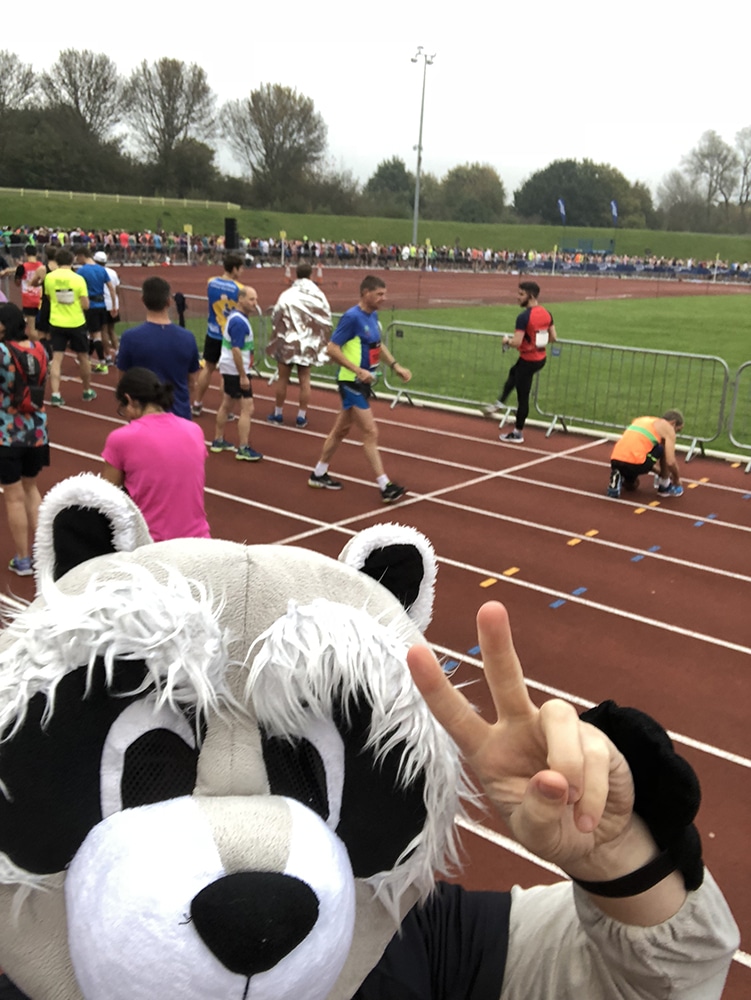 I packed all of my usual kit and I was feeling good an injury free. I’ve started wearing calf sleeves which really seem to help me for longer distances and I even invested in some new socks for the occasion (I always wear Hilly Monos.) For nutrition I had my Pepperamis and Peanut M&Ms (don’t ask it just works) and my Tailwind (electrolytes and other good stuff) powder diluted and in two bottles on my belt. This is almost exactly the same kit that I used for Endure 24 in June where I managed 80 miles and the 7 marathons in 7 days a couple of years back. Well… apart from the Raccoon outfit! But I’ve run a couple of half marathons as the raccoon and it’s been ok so I was pretty confident that this would be ok too. You might say hubris… 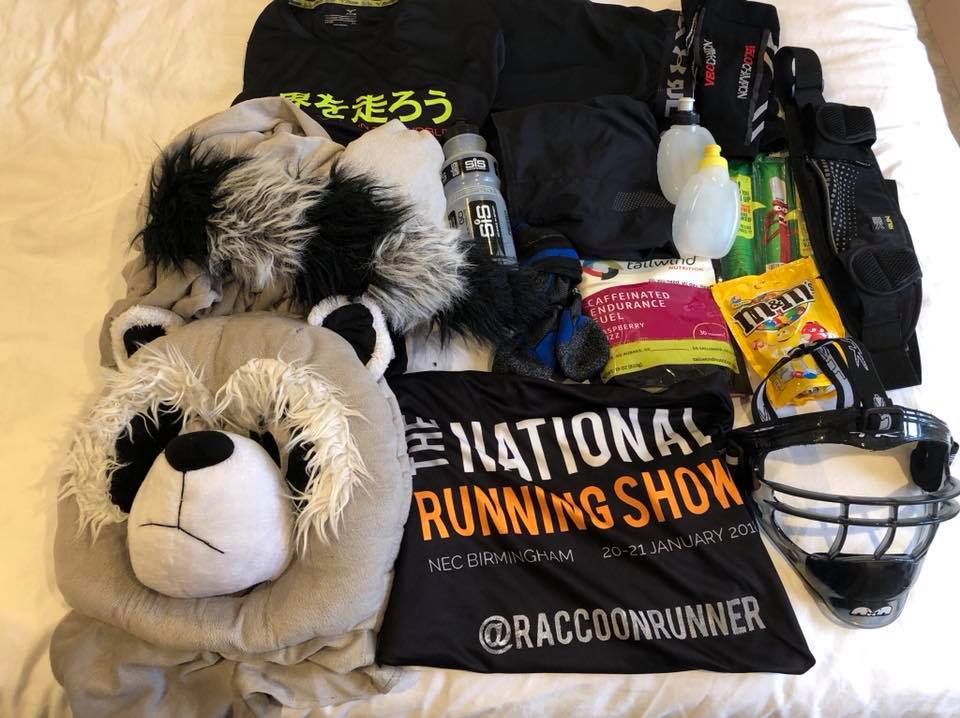 We started in an amazing athletics stadium and there were lots of proper runners doing dynamic stretching and stuff. I’ll be honest I didn’t quite fit in, sat there munching a Pepperami and holding a fluffy raccoon head but the banter was pretty good. The race started well – I’d been put in with the fast runners for some reason who started an hour earlier than the rest but I dropped to the back of the pack to stay at a nice easy pace. I met a guy called Tony who ran with me for quite a while and because we were at the back of the pack we pretty much had the course to ourselves. Tony was running his first marathon but seemed like a seasoned pro – I think I was holding him up a bit but he graciously stayed with me for the whole first half of the race. We were having loads of fun and banter with the crowd – I don’t think I’ve ever given so many high 5s in my life! We had a good laugh and the course was fairly kind to run on so I really enjoyed the first half.

Tony left me at about 12 miles I think and I started to slow a little as the temperature began to rise – 20 degrees in October was not expected nor wanted! The problem was that the heat couldn’t escape and the harder I breathed the hotter the costume became. I was determined to run the whole race with the head on but I did stop a few times at the aid stations to take it off and pour water all over myself. This gave temporary respite but I just couldn’t seem to keep hydrated. I’d not allowed for this with my fuelling so I quickly ran out of electrolytes too which is probably where the other problems crept in later. I started to get a bit dizzy and my eyes were stinging so I resigned myself to the fact that I would have to walk for a bit. 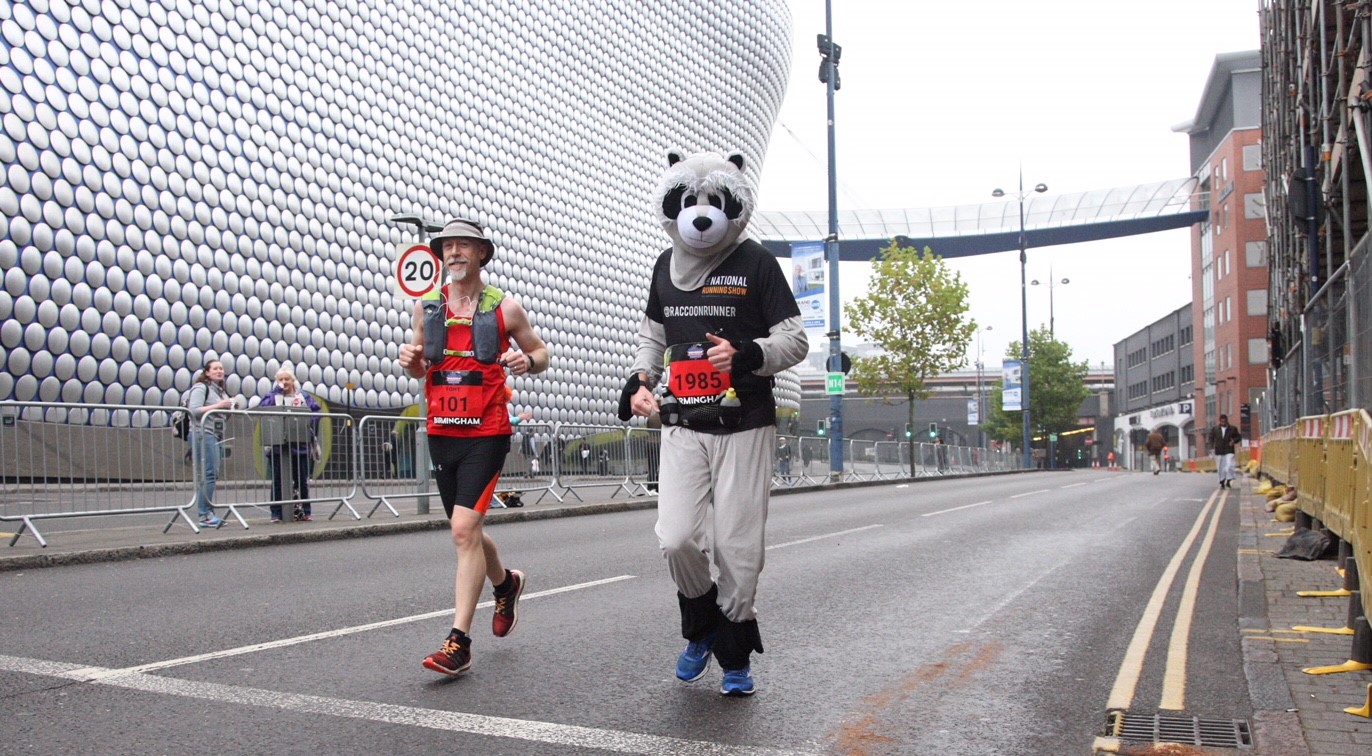 This is where I met Tiffany who was suffering with cramp at the time. I helped her stretch it out and then walked with her for a little bit too. She was really cool and we had some banter about what we planned to eat and drink at the end which took my mind of the heat. We walked together for half a mile or so and I started to feel a lot better and left Tiffany behind to head of running again.

2 miles later and I hit the loop – where the finishers can turn left or you go right to do ANOTHER 10 miles. I was so hot at this point and the temptation to just sack it off and turn left was huge. I decided to toughen up and keep going, walking again now but very slow – the marshal at the junction flashed me a worried smile with the encouraging words ‘oh dear.’ The more I struggled, the more banter I got from the crowd – one guy shouted at me ‘never regret your decisions’ and then laughed in my face whilst a few more people called me the ‘raccoon walker’ rather than @raccoonrunner which is written on my t-shirt. It was pretty funny and stopped me from getting glum about the situation. Also, the crowd were so awesome – giving out sweets and water at every corner and playing music out of their windows which really helps lift the spirits.

I wobbled on for a bit just slowly chalking up the miles snail-like, setting myself short term goals like run to the lamppost or that car etc. Then a group of kids asked me to race them to the end of their street and I ran a bit more (I was really trying but they annihilated me!) I was up to about 19 miles and was mainly walking now, cramping up every time I tried to run, there was lots of water but the fact I’d got no salts was really hampering me. As I was passing runners on the opposite side, loads of them shouted words of encouragement which kept me on the course. I pretty much checked out at this point, my legs were fine but I just felt really empty and lethargic. Crossing mile 20 was a big moment as I realised I was actually going to finish the race – a big smile crossed my face and I set off into a jog… for about 2 seconds… then I got cramp again! Reminding myself that 6 miles is still quite a long way I went back to my fast walk/lollop and kept trudging on.

Then at mile 20 something Tiffany (the girl I’d be running with earlier) caught up with me. She looked much better and was running really easily. She was in good spirits and we had some good banter for a mile or two. She also gave me one of her gels which was amazingly kind and gave me a little boost. We passed the marshal at the loop point who smiled at me and said I looked a lot better this time. Tiffany was much stronger than me at this point and tried to get me to run on with her but my legs were still cramping so I had to stay back but those 5 minutes of banter from her really kept me going.

I got to the last mile and the crowds were getting bigger and the support was electric. I wanted to salvage something from the day so I decided to run the last mile – no matter how slowly I was going to run it! Now if I’d known about the hill at the end I might not have been so ballsy but I went for it anyway. I was cramping a little but not too bad but I was getting way to hot. The crowd were going absolutely mental and to be honest I only kept going to avoid the public humiliation of walking! Then a voice from the crowd rang out ‘never regret your decisions’ – it was the same guy from earlier who’d picked me out again! I absolutely cracked up laughing and smiled my way over the finishing line.

As soon as I took the raccoon head off and had some electrolytes I started to feel better. The feeling of achievement was amazing – I genuinely don’t know how I managed to finish that race – I was right at my limit and to keep going.

So what if it was my slowest marathon ever – the feeling of crossing the line and not checking out is amazing! So to Tony, Tiffany, the runners that shouted me on and to Mr ‘never regret your decisions’ thank you for getting me over the line ?