So it’s May! Where did the first few months of this year go?! I’ve been struggling to get out and run recently so when the opportunity arose to do the new half marathon Run Gatwick I jumped at the chance!

Now just to qualify things, I am massively out of shape and my physique is starting to resemble a plastic waxwork that’s been left a little too close to the fire. My excuse has been work but the real problem is food!!

Yes, I’ve been super busy so running has generally been less frequent and shorter distances. However, I definitely haven’t skimped on lunch! It’s hard to justify the “mac n cheese with a meatball wrap on the side” lunches when you aren’t working out! I’ve always struggled to eat well. We generally eat good food at home (eggs for breakfast and fresh cooked dinners) but lunch at work I can often go rogue! I basically need watching at all times to prevent me buying pizza! Don’t even get me started on my alcohol and Chocolate consumption…

A couple of weeks ago I noticed my shirts getting a bit tighter (clearly they shrunk in the wash?!) and my chin was slowly getting eaten by my neck so I decided to do something about it! I started squeezing a few more 10ks in – nothing major but ramping up the speed on occasion and even getting one round in an average of sub 8 min miles (v quick for me.) I’ve shifted a couple of pounds and already starting to feel more energetic in everyday life too.

I’m also supplementing running with a lot more cross training – light weights and core stuff. It makes a big difference to injury prevention so would recommend it to anyone! This is a big step for me as I’m trying to be a bit smarter about training – I used to just run a lot and hope to get better and it turns out that isn’t a good strategy!

So along came Gatwick! I knew I could probably get round in an ok time but am still definitely carrying about half a stone of macaroni cheese blubber that I probably don’t need so I wouldn’t be setting any records! Then someone messaged on twitter asking if I was doing it in the raccoon costume. Well I wasn’t planning to but now I sort of feel like I should! I mean it’s way more fun in the costume as you get loads of banter but I’m still pretty out of shape so not sure it’s such a good idea…

I finally decided that banter was more important to me than setting a good time so off I set to Run Gatwick with the raccoon suit in hand! 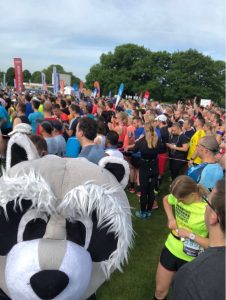 At the start of the race I felt great! I’d met quite a few running mates during the warm up and had some banter in the start pens. The first couple of miles breezed by and I was easily keeping pace with the 2 hour crew. Sub 9 min miles in the raccoon costume may have been a little bold but hey!

The first 5 miles skipped by marred only by tripping over traffic cone that I didn’t see (thanks to the guy who wisely advised me to run on the side where there weren’t any cones given that I have no peripheral vision in the raccoon). Then I started to get a bit hot, the problem is that when u have your face covered the heat build-up is cumulative, so you just get hotter and hotter. Plus the sun was coming out and I was slowing and starting to lose the 2 hour pacer. It was at this point I had a decision to make – push through it and catch up or chill out and hang back. For the first time in a while I actually just decided to take it easy and enjoy the run. I even walked on a couple of occasions when there was an incline (there really weren’t any major hills on the course to be honest.) I spent the rest of the race checking out the scenery, spying planes and high fiving as many people as possible. I really had a laugh and thoroughly enjoyed it. I finished in about 2:15 which is quite slow for me but I was dressed as a raccoon – who cares! It was loads of fun and a flat, easy race so I’d thoroughly recommend it!

We finished in an awesome event village which had plenty of food and drink available and an absolutely brilliant band entertaining us. My only regret was not bringing the kids along as they’d have loved it there.

Anyway thank you Run Gatwick for reminding me not to take my hobby too seriously – especially whilst dressed a giant raccoon! Now to find another one to enter… ????