It’s the 21st June and this year I’ve run 35 times and covered exactly 300 miles. My target is 1,000 miles so it’s fair to say I’ve been slacking! Work has been mental and I’ve had lots of other stressful things to deal with which means I simply haven’t had time to fit runs in. I have lots of good excuses but actually they are just excuses and I need to take better care of myself. I’m getting a bit flabby (back up to 15 stone) and generally not looking after myself – if I laugh too had I wobble and that’s not a good place to be! 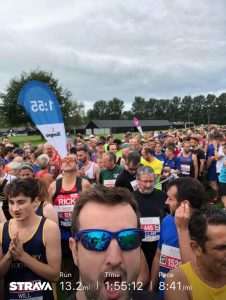 I needed a little motivational boost for my running and that was provided by the Shrewsbury Half Marathon last weekend. I was feeling a little out of shape so I fully expected to deliver a very slow timeas I waddled around the course. Susie Chan was hosting the event and the energy she has is infectious and put me in a good mood! I got to hang out with Paul Addicot and a few of the other pacers beforehand and there was some good banter flying around, I was really enjoying myself and because I had such low expectations of my performance I was really chilled. The race had some really cool eco-friendly initiatives such as cardboard water bottles and electric lead out cars which I really liked and the course was stunning. Yes there were hills but plenty of them were downs to make up for the ups – I took it steady on the way up and then wobbled at pace on the way down! I ended up with a 1:54 time which I was pretty happy with considering my conditioning. If I was in really good shape I got probably do sub 1:50 on the course but I doubt any better than 1:45. So in my head I’m only 5 or 6 minutes out of shape ? 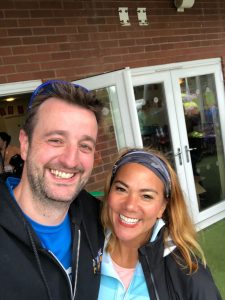 Inspired by the awesome Shrewsbury half, I am going to take better care of myself and have set myself a target to get to 1,000 miles by the end of the year and also to drop back down to 14 stone by Christmas. The distance is achievable but a stretch andI’m hoping the weight will follow. I’ve added the 14stone target though because I am terrible with my diet and I probably need to take a bit better care of myself. Why does chocolate and beer have to be so tasty?!?! I mean to be really clear I’m still going to eat like a pig but I will try and maybe have a few more nights off the booze and eat a little less chocolate.