A few weeks ago I was lucky enough to be invited to take part in the Reebok Ragnar White Cliffs event. This is a 170 mile relay along the south coast from Margate to Brighton. Teams of 10 people complete around 17 miles each in 3 stages over a 24 hour (ish) period. It’s an absolutely bonkers and brilliant event with the van banter (vanter?!) being just as big a part of the experience as the running.

I was running with a team of 8 pretty awesome ppl (we were one man short) that included some awesome runners and ultra runners who were significantly faster than me – there was even an Olympic silver medal in the group! I was a bit nervous that I was going to be the slow one but I decided to have a go anyway as the event sounded to cool to miss! We were all running for team Yamatune. For those who don’t know, Yamatune are a premium Japanese sock brand and also one of our exhibitors at the National Running Show. 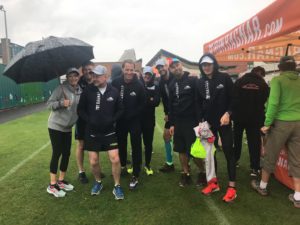 Yamatune invited us all down the night before the race started to have dinner and a short race briefing. It was great to get to know our team better and to find out more about how the race works (obviously I hadn’t read any of the pre race instructions in my usual unprepared way!) There would be 2 vans, each carrying 4 or 5 runners and a driver. Van one would drop off and collect runners at the end of legs 1-5 whilst van two would head to leg 6 and cover the next 5 legs and this repeated across all 30 stages. The runners pass a special baton to each other which is a snap bracelet that is really lightweight and easy to transfer.

Our captains Paul and Luke had allocated us all legs and target finish times which made based on our ability. This was really nice as it took a bit of the pressure off but I did feel a bit guilty that I had to run 10 minute miles when my new friend Max was being asked to run 7 minute miles over a 13 mile double leg in the night to make up for us being a man short! I felt pretty confident I could make up some time as 10 min miles is slow for me so this was a clever move from the captains to give us low target times to take the pressure off the non-elite runners.

After dinner, our amazing hosts Yamatune presented us each with a couple of pairs of their socks and a plethora of branded caps, t-shirts and hoodies to wear. I’m really particular about socks and have to wear calf sleeves normally but I decided that I’d give the Yamatunes a try for the weekend given they were hosting us! I will be honest and say that the socks are amazing – incredibly comfortable and supportive (I wore the long round toe ones). I wore them for the whole weekend and absolutely love them – I will be buying more!

The race started the next day and the teams were started in waves based on projected finish times. Because we had such a god team we were in the final wave of teams to start ?. Our captain Paul lead us out calmly, sitting comfortably in the pack for about 400m before turning on the afterburners and putting us into the lead by quite a distance! He then handed over to team GB prospect Rory who maintained that lead with some blistering pace (both guys doing low 6 min miles with ease, even though they had the harder terrain to run.) We then messed up a bit and went to checkpoint 4 rather than 3. I was running the 4th leg so the van dropped me there and raced back to leg 3. I was really nervous waiting for the baton to come in. We were in first place and I was being handed the baton by Wendy Sly, editor of Athletics Weekly and former Olympic Silver Medallist! Before I knew it, Wendy was there, had handed me the baton and I was off. I didn’t have a watch with me so I had no way to regulate my pace, my phone has Strava but it was in my back pocket deliberately. I’d decided the night before to just run my own pace and not stress too much. However, relay fever had overtaken me and I was bombing along having a great time. The scenery was amazing and the course incredibly well marked so my fears of getting lost were unfounded. I passed a couple of runners and no one got past me so I felt I’d done ok and not let the team down. I even managed a sprint finish at the end, almost catching my teammates by surprise as I was a bit faster than expected! I checked my Strava afterwards and I’d averaged 7:40/mile for the 7 mile leg including my first ever sub 7 minute mile! This is the power of Ragnar! I was so motivated to not let the team down that I ended up massively overachieving. I mean this is not elite times I know but I was absolutely delighted and buzzing with excitement!

We were hit by some pretty atrocious weather in the night section and as the rain hammered in, things got tough. 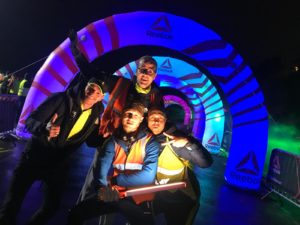 We were holding second place but our lack of a 10th runner would surely tell on the latter stages. The weather was so bad that stage 13 was closed so the organisers said that Tom and I had to run 14 together and we pushed out a 4 mile stint in the dark at an 8:50 average. This was nice and comfortable and I felt good for the morning session. Tom was great to run with and I really enjoyed the banter.

Tony our driver (and an an incredibly accomplished athlete in his own right) was keeping the van nice and warm which was aiding the recovery between legs plus there was plenty of time to stop for food and water. We also had chargers and all sorts in the van to keep us connected. However, this did cause us to have to jumpstart the van at one of the legs because we flattened the battery! A load of other runners helped us bump it down the hill and get moving to the next leg!

By the final leg I was feeling a bit tired but still managed to smash out the last 6 miles in just under 8 mins average. For me this is really fast and I was proud of my efforts. Because the team were so nice and such great fun it really brought out the best in my running. We had lost sight of the win during the night session but were still confident of a top 10 finish from the 120 teams which was incredible from a team of 9!

Van 2 captain Luke brought us home with a cheeky double leg (13 miles!) to finish and we all ran the last 200m together. A brilliant effort from the guys meant that we actually came 4th overall which was a fantastic result and an amazing way to finish the weekend. I loved every minute of Ragnar and we are already planning to be back next year!

Both Reebok Ragnar and Yamatune are exhibiting at the National Running Show 2019 and I would heartily recommend that you try them both as they are both amazing! 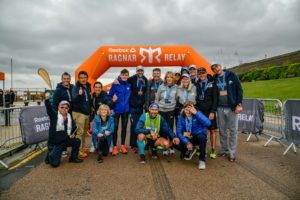