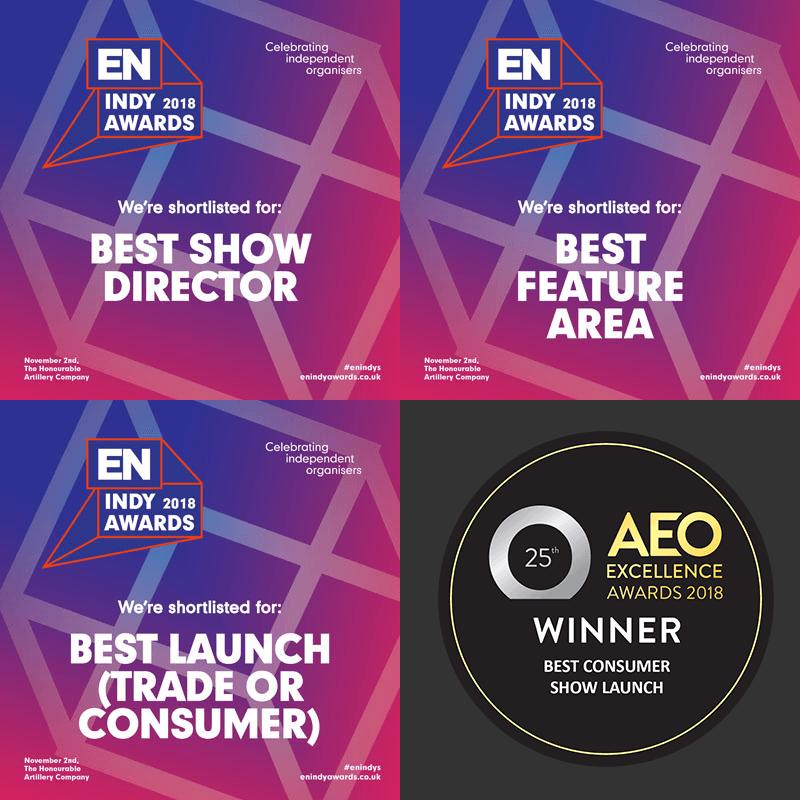 The National Running Show has been shortlisted for two awards at the EN Indy Awards 2018, an exciting new awards scheme dedicated to recognising the achievements of independent organiser shows, teams and individuals.

With the exhibition industry seeing more and more shows launched by smaller organisations, the aim of the ceremony is to give these shows and companies the chance to showcase their talent and successes against similar organisations.

The 2018 EN Indy Awards ceremony takes place on 2nd November at The Honourable Artillery Company in London and is set to applaud the very best new talent in the exhibition industry. In excess of 300 industry professionals are expected at this valuable networking and celebratory event at the end of next week.

The shortlist announcement comes at the end of a highly successful first year for The National Running Show. The show launched as the first non race-affiliated show of its kind in January 2018, gathering thousands of runners, sports brands, retailers, nutrition experts, race organisers, communities and expert speakers together under one roof like never before. It proved to be the event to attend for runners of all abilities and interests as well as a must for any business related to running.

Strong potential for future success and growth will be a key factor at the EN Indy Awards and The National Running Show certainly demonstrates plenty of this. The 2019 event is set to build on the success of 2018 with an even larger floor space, many more interactive sponsored areas and the presence of many big names in running. The show will also feature a high-profile speaker line-up that includes former track champions Roger Black, Iwan Thomas, Paula Radcliffe and Jo Pavey, plus a host of global adventurers and endurance runners. Thousands of tickets have already sold for the 2019 event, which is on course to be a sell-out.

Mike Seaman, Director of Raccoon Events, commented: “We are thrilled that The National Running Show has been shortlisted in two categories at the EN Indy Awards. To have our expertise and success recognised at these new industry awards is a huge honour. I am also delighted to be shortlisted for Best Show Director and would like to pay credit to the whole team at The National Running Show for their commitment and passion in delivering the UK’s very first independent exhibition exclusively for runners.”

The National Running Show 2019 will be preceded by The National Running Conference in partnership with Running Imp on Friday 18th January. This industry-leading B2B conference will host key leaders and influencers in the running world who will come together for one day to network, share knowledge and keep driving the UK’s running market forwards.