The National Running Show has come away with two awards at the EN Indy Awards 2019 which took place on Friday 11th October at The Honourable Artillery Company in London.

The EN Indy Awards is an awards scheme dedicated to recognising the achievements of independent organiser shows, teams and individuals. 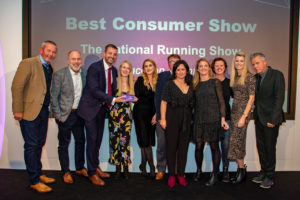 Raccoon Events claimed the award for Best Consumer Show for The National Running Show for the second year running, in a competitive category looking to credit one show that has met the consumer challenge by delivering a superb visitor experience. Creative marketing initiatives, year-on-year success and originality were key qualities recognised.

The Run Clinic at The National Running Show went on to take the award for Best Show Feature. One of many interactive features at The National Running Show offering visitors a hands-on experience, The Run Clinic enables runners to identify their running technique patterns and link these movement patterns to potential injury or running inefficiency. It has proved an excellent way for runners to get active and involved in this full weekend dedicated to running. 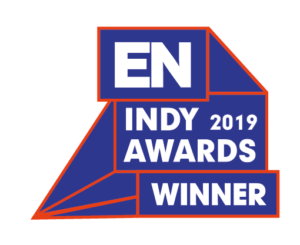 The National Running Show is the UK’s biggest independent running show, offering runners the unique opportunity to try out and purchase the latest products and limited editions from big, well-known brands through to smaller brands not found anywhere else. The Birmingham show expects more than 55,000 visitor ticket registrations for 2020, all of whom will be able to discover the latest kit, tech, nutrition and races from over 250 exhibitors, learn from inspiring speakers and improve their running technique thanks to the hands-on feature areas.

An exciting development for Raccoon Events is the expansion of the event to include The National Running Show London, taking place on 13th-14th June 2020 at the Business Design Centre.

Over 300 industry professionals attended the EN Indy Awards 2019 to celebrate the very best talent in the exhibition industry. Mike and the team were there to collect their awards and it proved to be a lively afternoon of networking and praise for the many organisations and companies present.

Mike Seaman, CEO of Raccoon Events, commented: “We are over the moon to have won two awards at the prestigious EN Indy Awards 2019. As we prepare for our third show in Birmingham in January it is wonderful to be recognised in this way. I would like to thank my entire team who have worked so hard and been key to the show’s success. We launched the show believing that there was a gap in the market for an independent running expo and we have received an overwhelming response from the running community, which is great incentive for us to deliver a superior event year on year.”

The third edition of The National Running Show Birmingham takes place on 25th-26th January 2020. Tickets cost £10 and are valid for both days. Go to nationalrunningshow.reg.buzz to secure your ticket.

The National Running Show London takes place on 13th-14th June 2020. Tickets are currently free and are available at nationalrunningshowlondon.reg.buzz.