How many times have you been at the track and heard the coach say, ‘empty it’?  We all know many sessions are designed to place you under the stress of racing, and help you practice digging that little bit further to complete each session. Basically, representing those race conditions so on the day of the race you are on best form and know what you have to do.

As an endurance/ultra-runner the term ‘empty it’ was an odd concept.  I would never empty it totally as I simply had to keep going, I would have run the next minute, hour, day, or week to complete the event.  Yes, I was tired, but I always had to have something in reserve, emptying it was an alien concept.

However, the truth was most of the time, in my normal life, I was living on empty. I have suffered from severe mental health problems for over 20 years and mentally I was empty. Most of the time I had nothing left, yet my endurance athlete side had taught me to carry on and just keep going.  So, in theory I always had something left, truth was my endurance athlete side had taught me to always have something left, always eek out that last bit of fuel to near indefinitely.  In the same way as mentally, I was able to carry on with very little left in the tank for a very long time.

So why would I do this, I have had years of therapy yet that had not helped me replenish my ‘mental health’ tank?  Perhaps deep down it was the endurance athlete attitude part of me coming out again.  You see as an endurance athlete it can be lonely and isolating.  When you are struggling with the distance, you have run one marathon and know there is another one to go before you finish for the night and then have to do that distance all over again the next day.  The only person that is truly going get you out of that depth of despair and give you the belief that your body can carry on despite every inch of your physical self pleading to stop is – you!  So, when I went into therapy and had to hand myself over to therapist, I probably really didn’t listen to them, as I was strong from years of endurance running, I had run all those miles by myself, I had got myself out of the depths of self-doubt and completed those impossible distances.  Why would I need anyone else?   The truth is the issues with my mental health were so deep, so complex that I would never do it by myself.  I needed a professional to help me.  But my endurance athlete was telling me different.  I will listen to the therapist, but deep down I will not let go to them. After all I had to have an element of stubborn and bloody mindlessness in me to run the extreme distances by myself in the first place – right?  So, what made me change?

The Track.  In particular session that involved 9 runs of 300m, in sets of 3 with a 15-minute gap between each three.  Sound easy right?  Wrong.  Come that last set of three, your body is screaming at you to just stop.  In a similar way to the ultra-distances I had ran, but this time for the last three hundred we are being told to empty it by the coach.  The only difference is I have not run a marathon with another one to go, I have run only 2400m, with a mere 300m to go, but the intensity is much stronger.  It is so strong I am really wanting to give up. An overwhelming urge. But ultra-running has taught me not to give up.  However, this time I can’t go further without feeling the trust I have in the coach and those other runners around me. 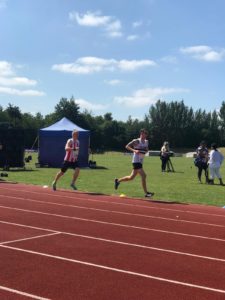 Oh my good God, this hurts.

Are my legs lead?

Must keep the form?

Am I running backwards here?

My legs have nothing in them.

I collapse – I have never collapsed after a race.

I can’t breathe, I have never struggled for breath this hard at the end of race.

Am I going to be sick?

This track seems a nice place to sleep……

Fifteen minutes later I am feeling better and starting to become more aware of my surroundings.  I get up from the track.  So that was emptying it.  Wow… Never thought that would happen.  But down the line I realised that this relaxation in me allowing myself to run to empty was significant, as I had let something go.  The endurance/ultra-running in me that always held something back had gone.  I had let go.  But more so, I felt like I had let go of the old me, this was the new era.

What was different?  The first one was my coach had built a trust with me that meant I would do what he said. I am not saying therapists did not build that trust, but just as I got to that stage, they left or I got moved elsewhere in the medical system.  So, I was back to myself, the only person I could trust. With my coach I feel they are going to stay a feature in my running life.  If I move on or they do, I will always be in touch with them to run through thoughts or ideas on getting the best out of me.  The second thing is the athletics club is a safe environment.  The runners on the sessions with me, they all have different abilities, but we are all, quite literally, on the same track.  We will get through this together, we will use each other to pace ourselves, on one running set you might feel weak but the other runners can pace you through and for the next set it could switch.  You help each other, we are in this together, we will get through this.  But it is safe in another aspect.  All the coaches are first aid trained, if you do push yourself too far, or get hurt on the way, they can at least help you until you get some professional care.  But this has now gone one step further from the physical.  English Athletics run something called #RunAndTalk, this is basically people in the club who will take groups for runs, where you run at a pace to just chat.  Not something you may get chance to do on this 300m sessions!  The people running these sessions are not therapists or counsellors.  The sessions are set up just to enable groups to chat and talk as they run.   If you don’t want to chat just listen and use the session as a gentle recovery run.   In the same way that someone might share your experience on a track session, these sessions might help people share experience of life that could help others get through difficult times and help replenish those empty tanks.

For further information go here and speak to your coach and #RunAndTalk Sessions: