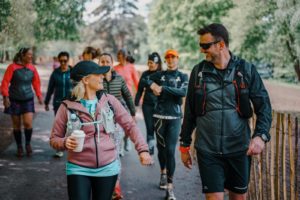 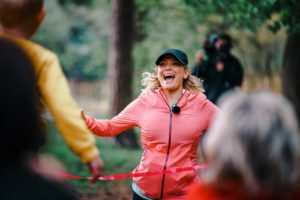 Singer, Actress and National Running Show speaker Suzanne Shaw has completed a staggering 19-hour run, without stopping, raising over £8,500 for Samaritans. After struggling with her own mental health for decades Suzanne committed herself to raising awareness of the importance of looking after mental health and to shine a light on the increasing suicide rate in the UK.

Supported by The National Running Show, where she is speaking at Farnborough International in July, Suzanne started her challenge at 10pm on Tuesday 18 May 2021 at Raccoon Events HQ in Guildford, Surrey alongside CEO Mike Seaman plus a host of runners from around the country, and completed the challenge at Virginia Water at 5pm, having completed over 60 miles during their 19-hour run.

Suzanne commented: “It hasn’t really sunk in yet that it is over! Just three months ago I hadn’t run more than a few hours, so I am over the moon to have completed such a huge personal challenge whilst raising vital money and awareness of the issues facing people’s current state of mental health.

“Being part of the running community has been an incredible bonus to taking on this challenge. Runners coming out to support runners without any agenda or expectation, just running because they love running and trying to bring out the best in other people, it really is a special community and I am very grateful for everyone’s support.”

The National Running Show supports runners of all abilities and has built a rock-solid community of like-minded, supportive runners. Mike Seaman commented: “Suzi has achieved such a huge amount in the last 19 hours, not only the phenomenal amount of money she has raised for such an incredible cause, but she has surpassed even her own expectations of what she was able to achieve which I am honoured to have been a part of. At The National Running Show, community is key and to be able to get out and put that into practice is what it is all about.”

Suzanne became a member of the chart-topping band Hear’Say, selling over 1.5m records and holding a world record for the fastest selling non charitable single. She won series 3 of ‘Dancing on Ice’, was a series regular on ‘Emmerdale’ and has numerous West End & Touring theatre credits.

To make a donation visit https://www.justgiving.com/fundraising/SuzanneShaw2021