You got it, it’s really artificial (and not virtual) and it’s set for the end of June, under the registered trademark of One Hundred®. 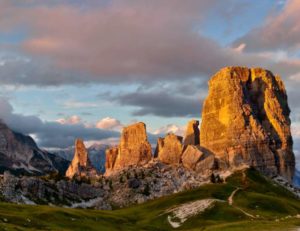 It’s an unprecedented race: The Artificial Mountain Trail World Championship takes place from 25 to 27 June and will simulate a race in the Dolomites, in the Italian Alps. How? Thanks to advanced technology, which is unique to One Hundred® for this launch, and which promises to revolutionise virtual racing globally.

In terms of similarities with a virtual race as the ones we already know, the only things is that it can be run anywhere in the world but in this case using a dedicated app. Moreover, it is an original idea that allows athletes, wherever they are, to run on an equal footing with each other.

The CEO of One Hundred®, João Andrade, explained that in partnership with the American technology company, IDERU, they developed an application that enables the creation of a “signature of movement” for each athlete, recognising if the runner who signed up is actually the one running the race. The artificial intelligence system, called SARA, counts with over 13,000 hours of work already, with dozens of athletes from all around the world who have helped get it tested over the past 18 months, and is now able to recognise unknown movements: if the user of mobile phone is on a skateboard, in a car, on a bicycle or even on roller skates the system will send a message to the Race Director. 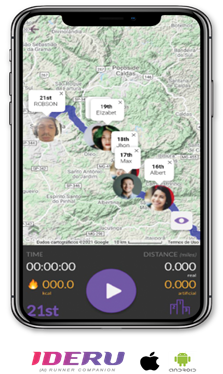 This enables possible “fraud” detection, since the application actually knows who is running. In addition, the technology allows you to see the «avatar» of each runner on the map (in the Dolomites track) and their progression and ranking in real time, up to 100,000 athletes. The algorithm automatically converts the distance and the real altitude covered by each athlete and calculates the effort that still has to be made, as if it was a real race in the beautiful running scenario of the Dolomites.

For a better understanding, an athlete who intends to perform the 100-mile race on terrain with not very accentuated elevation gain, will see the distance adjusted automatically by the application, in order to make the athlete’s effort equal to the others – who on contrast – race on locations with more elevation gain.

The competition has registrations opened until June 23rd, and it already counts with registered athletes from 7 different countries! The registration fee has a 30% discount to the regular price so more people can become pioneers and join the race!

One Hundred® was born from the dream of João Andrade, previously a health-tech / biotech entrepreneur for over 13 years, of putting focus on mountain trail running, transforming the whole experience into a “format that could easily be digested by the public, making good use of the current broadcasting technology so that family members, friends and fans are able to follow the competition. Our biggest investment is in this, filming in mountains is very difficult”, but it will result in “new opportunities, more investment and sponsorship in the sport”, he declares.

The mission is simple: to help the sport of Mountain Trail running be more widely promoted and evolve into a major world sport.

The now ultra-marathon runner who tackled ultras up to 175 miles was, until recently, just a businessman when it came to sports and didn’t do more than the usual not so bad “two or three trips to the gym every week”. At the end of 2016, he decided to take the focus off his executive “city” work, which used to consume “up to 20 hours a day”, and made a commitment to make a radical change is his life. He started by searching Google for the toughest endurance tests in the world. He found Badwater 135 in the USA, and pointed the needles to be one of the 100 selected to compete there in 2020. The coach, Tiago Aragão, who later became the co-founder of One Hundred®, called him “a tad crazy”, but agreed to prepare him for the race.

From there, he began training, participating in national and international competitions, and without being able to shut down his entrepreneurial mind during these events, he always keeps his eyes on race organisers, until he realized that there were countless opportunities in the world of mountain trail running and ultramarathons. In 2018, João Andrade, who was the first Portuguese to enter the London stock market, sold his stake in his previous company and decided to start One Hundred®, in order to create the world’s first mountain trail world championships for distances of 10, 25, 50 and 100 miles.

That’s how the new World Series started to emerge, with plans to have competitions in several countries, organized with the use of subsidiary companies of One Hundred®. The goal? To make the entire professional side of the sport grow but also to attract the masses to practice this beautiful sport as well as an audience to watch it. One of the main objectives, according to João Andrade, is to create value in the sport, so that more and more athletes can live exclusively from trail running and continue to break barriers and pushing the limits of what was once thought possible. Included in the project is the creation of a bespoke registration platform for coaches, nutritionists and support crews, so that they can connect and offer their services and make life easier and potentially reduce costs for athletes who have to travel outside their home country of residence to compete.

For 2022, there are already five countries to integrate this circuit: Portugal, Brazil, Italy, United Kingdom and United States of America.

In each country One Hundred® counts with experienced local teams with ultra running and mountain trail running backgrounds and the best in organising races. They are supported by the Group team and board based between the UK and Portugal with Jeremy Woodgate as the company Chairman, Tiago Aragão as the COO, Matteo Turi the CFO, the magical non-executive Leonardo Fontenele from iMagic (maybe the best content architect in the world), and the creative and marketing team from NorthBrands who become partners of One Hundred® including Bruno Claro, Miguel Crespo and also the Head of Operations & Logistics Pedro Conde. João Andrade is the company’s CEO.

There are many big names involved and amongst the local teams you will find the Italian Olympic Gold Medalist Mauro Prosperi, famous for getting lost during an Ultra in the Saharan Desert in 1994 for 9 days (and surviving!), the Welsh TV Presenter and renowned ultrarunner Lowri Morgan(Race Director Wales), Rhys Jenkins the first Welshman to complete Badwater and the record holder for the Welsh Coastal Path, Cristiano Marcelino(Race Director Brazil) and Nilce from Ni2Sports in Brazil as well as Rodrigo Isaac and Chico Serra from Speed. In Portugal an experienced team based in the Azores who organises the best races in the region are onboard led by the Race Director Bruno Fernandes, and in Italy the great Camillo Franchi president of Atleticom, is our Race Director who leads a talented local team. The US team is in the final process of being selected and will be announced in due course.

Within each race, there will also be a «Special Stage», which João Andrade considers to be important to captivate the spectators’ attention and “stimulate the race”. It is a 10 km segment, with 1,000 D+, followed by another 10 km segment with 1,000 D-, with specific money awards only for this part of the race.

The Special Stage Series is now being designed to also become a type of independent Up&Down competition aside from the World Series after the success of the first edition in the Douro Region in Portugal and the initial interest seen already in Rio de Janeiro Brazil.

For now, One Hundred is concentrating on organising the World Mountain Trail Artificial Running Championship, at the end of June, but there will be exciting news in the following weeks with the global launch of the World Series, Special Stage Series and Training Camps coming!