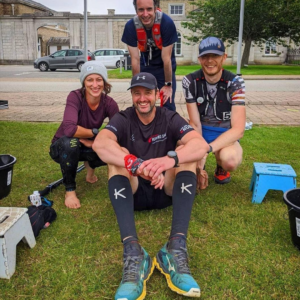 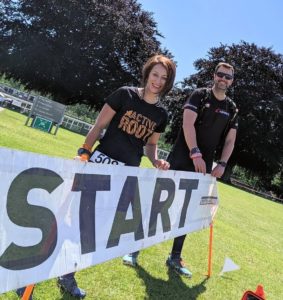 Yesterday I took part in #roc24 from @runorcycle and it was epic! I completed 90 miles in 24 hours and even managed to get 8th place!

Some of you may know that 2 weeks ago I had failed to finish another ultra marathon after struggling in the heat. For that race, I dropped out halfway through and I really had a point to prove to myself that I could do this and that I wasn’t made of glass!

The event comprised of 3.1 mile loops and you had 24 hours to do as many as you could either solo or part of a team. I was doing it solo but with Vic Owens (aka the Happy Runner) also along for the ride. I thought I’d get bored doing the same loop but actually it was quite an interesting mixed trail route around the grounds of an amazing building and with some stunning views to boot.

My first goal was to get through 100 miles in the 24 hours, which (spoiler alert) I still have never managed (I guess that will mean I have to try again one day)!

The first day was boiling and I really struggle in the heat which made it hard going. About 30 miles in I started to get deja vu – I was really dehydrated and struggling to keep moving. I started to worry I would have to drop out again – not another DNF! Vic was running with me and was amazing – so calm and supportive. She kept me focussed on micro goals and just keeping moving forwards. It was tough going but slowly the miles started to tick by and we got rolling. I genuinely think I would have bailed at 30 miles without her support – thanks Vic you are  an absolute legend!

We got through 50 miles in about 11:45 but once the weather cooled in the evening we were actually starting to go quicker than planned and I was wondering if the 100 might be on, but then disaster struck!

Vic was running on a recent injury and it all went south in the night. We started to lose time and she was clearly in a lot of pain. I don’t know how she kept going but that is one tough lady – who runs 70 miles on a bad leg?! Eventually Vic had to rest for a bit and so I carried on alone for a few laps.

It was mentally really hard being by myself but I was physically feeling good and decided to push ahead and see where the cards landed! The 100 miles wasn’t going to be possible, but a quick bit of trail maths meant that I could get 90 if I shifted so that became the new goal.

Unfortunately in my tired state I hadn’t thought to calculate any time for food and water refills or toilet stops! That error meant I was probably going to miss the new 90-mile target as well. This hit me really badly and I was starting to struggle mentally. With 4 laps to go i had a feed stop and I was moving so slowly that it took me an hour to complete the lap- one of my slowest of the race.

Because of my 1 hour lap, I now had just 2.5 hours to go to finish the last 3 laps (50 minutes per lap with no food stops) which was going to be tight – very tight!

Then help arrives and Vic appeared back on the trail, ready to run and ready to save the day. She was going to help get me home in time. I shared the target and she took on the maths for me which freed up my brain and let me focus on the running. That lap went by in 48:21 – giving me a 30 second cushion for the last lap!

With the end in sight, we found out that I’m not made of glass and there was more left to give. I was grunting and grimacing my way round like some kind of angry hyperventilating buffalo but we properly went for it and somehow crossed the line in 43:18, finishing the 90 miles with 7 minutes to spare!

I was so happy I could have cried and so grateful to Vic for pacing me round despite having only one leg- what an absolute legend and awesome friend you are – thank you!

It wasn’t the original goal but I am genuinely content. I was in a tough spot and I found something in myself to keep going – that is immensely satisfying. Every now and then running gives you these days and these highs and it feels amazing! The satisfaction of pushing through and completing something that you thought was impossible is just awesome.

A special shout out to my friend Gav who also ran and finished 100 miles in 23:27 for 5th place. Gav is such a humble unassuming bloke but is a total badass runner and absolutely smashed it! We passed each other quite a few times on the loops and having a friendly face out there gave me a real boost every time I saw him. Also massive props to the other man in our group Rob who smashed his marathon PB and still went on to crush 50 miles – legend!

What a thoroughly enjoyable event and a brilliant weekend that was. My legs are very sore now and walking is going to be a struggle for a few days but wow I earned that medal. 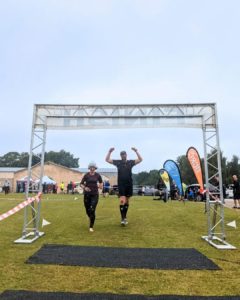 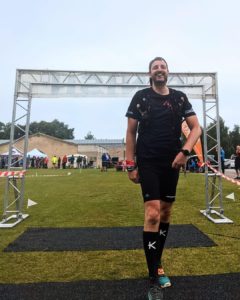