The National Running Show Birmingham in partnership with Children with Cancer UK took place on Saturday 25th and Sunday 26th January 2020, attracting more than 24,500 runners who were able to prepare themselves for a successful year of running and health. 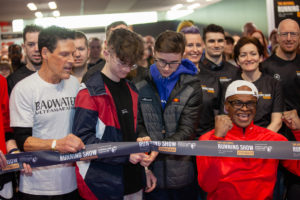 The weekend-long event was opened in style with Linford Christie and Sally Gunnell officially opening day one and Kriss Akabusi and Dean Karnazes opening day two. The halls quickly filled as visitors rushed to hear their running heroes speak on the various stages, while crowds gathered at the interactive feature areas offering a superb range of running-related activities and learning opportunities. 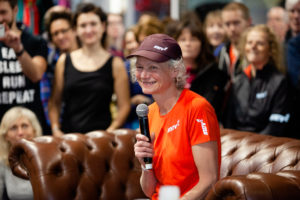 and David Hellard. As in previous years, the auditorium was packed as each guest thrilled the audience with their tips, wisdom and anecdotes, generating many questions from the floor for discussion afterwards. The Inspiration Stage, sponsored by Runner’s World, was hosted by Susie Chan and Iwan Thomas MBE.

As an Official Retail Partner, Intersport was home to a number of top brands including adidas, AfterShokz, ASICS, DW Fitness First, Energetics, New Balance and SafeSize. Meanwhile, over at Up & Running were Altra, Brooks, CamelBak, CLIF Bar, Craft, Hilly, Hoka One One, On, OOFOS, Plantronics, Polar, Ronhill and Saucony. In total, over 250 exhibitors spanned the exhibition halls, offering incredible choice and extensive retail opportunities under one roof.

The show was geared to enabling runners make the right choices ahead of a new year of running, no matter how far or how fast they run. The hands-on feature areas once more provided a valuable chance to speak to those in the know, trial products and learn how to improve technique. 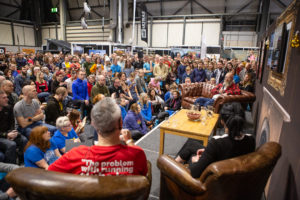 New for 2020 and in line with the growing popularity of trail running were areas including the crowd-gathering Ultra Zone, The OCR Zone and The Trail Zone. Covering further aspects of running were 3D Gait Analysis, MSK Clinic, Steve Cram’s Training Camp, Nutrition Advice Zone, Podiatry Clinic, Sweat Test Zone, The Run Café, The Run Clinic, The Running Bookshop, The Treatment Room and NURVV Run Experience. For the first time this year, three lucky winners walked away with a new treadmill thanks to the Treadmill Challenge sponsored by Hammer Fitness UK.

In an effort to make the event as environmentally efficient as possible, the organisers of The National Running Show 2020 had made their Sustainability Policy very clear in the run-up to the event and this was embraced by visitors in their thousands. Kit recycling drop-off points were filled, many used the Travel Carbon Calculator to offset their travel to the event and the vegan central café was a hit with vegans and non-vegans alike. The team at The National Running Show were proud to wear branded t-shirts made from recycled bottles, the Show Guide was printed on recycled paper and VIPs were gifted reusable jute bags.

The very first National Running Show Networking Dinner took place on the evening of Saturday 25th January and welcomed over 300 hard hitters from the B2B running community to meet, network and do business at the end of a highly successful consumer-focused day.

Event Director Nathalie Davies commented: “We are absolutely delighted with the success of The National Running Show Birmingham 2020. Thank you to every single person who came to the show and we hope that you went home informed and inspired, wherever you are on your running journey. It was a privilege to have so many speakers, retailers, brands and experts under one roof, each helping to advise and encourage visitors as they prepare for the year of running ahead. We are excited to be hosting the very first National Running Show in London this June and look forward to welcoming many more runners of all levels there.” 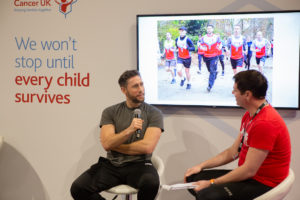 At the end of the show Mike Seaman, CEO of Raccoon Events, announced the launch of grants for athletes and confirmed that Eilish McColgan will be the first recipient of an Elite Athlete Grant.

The National Running Show Birmingham in partnership with Children with Cancer UK 2021 will return to the NEC on 30th – 31st January 2021 and tickets will be available soon.

The National Running London takes place on 13th-14th June 2020. Tickets are currently free and are available at nationalrunningshowlondon.reg.buzz.