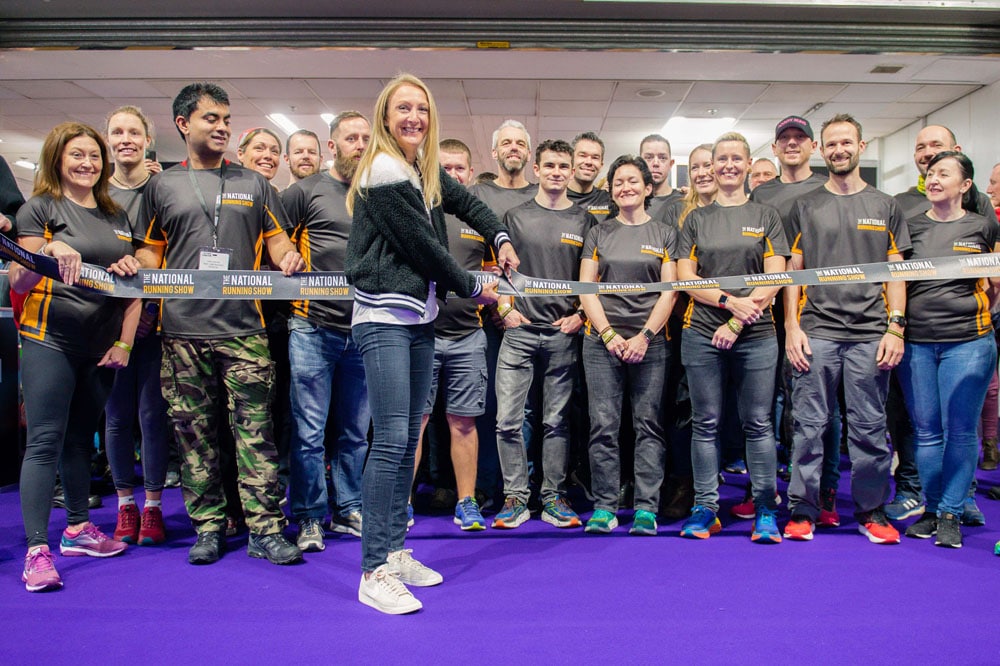 After a fantastic first day, Day 2 of The National Running Show 2019 had plenty to live up to. And it certainly didn’t disappoint, delivering yet another full day of expert talks, workshops, chats and running-related inspiration for the many thousands of runners gathered at Birmingham’s NEC today, Sunday 20th January 2019.

From the moment Paula Radcliffe MBE cut the ribbon at 9am, the scene was set and the crowds were back, ready to be thrilled and inspired for the year ahead.

After an enthusiastic welcome from show hosts Susie Chan and Ben Smith, Paula Radcliffe went on to deliver the first talk of the day, engaging a packed audience with her wisdom, tips and anecdotes from an outstanding marathon career.

The speaker programme proceeded with an awe-inspiring mix of runners such as Nikki Love, who ran 63 marathons in 63 days, Rob Pope, who ran across the USA five times, marathon runner David Hellard, cancer survivor Jenny Baker, adventurer Aleks Kashefi, adventure athlete Huw Jack Bassington, nutritionist Anita Bean, endurance runner Allie Bailey and TV personality Nell McAndrew. What each of the speakers had in common was a firm belief that anything is possible and that we are all able to achieve our dreams if we put our minds to it. Anyone walking out of the speaker sessions would have had renewed vigour to achieve their goals in 2019 – certainly a common sentiment throughout the show in what has proved to be an excellent second year. 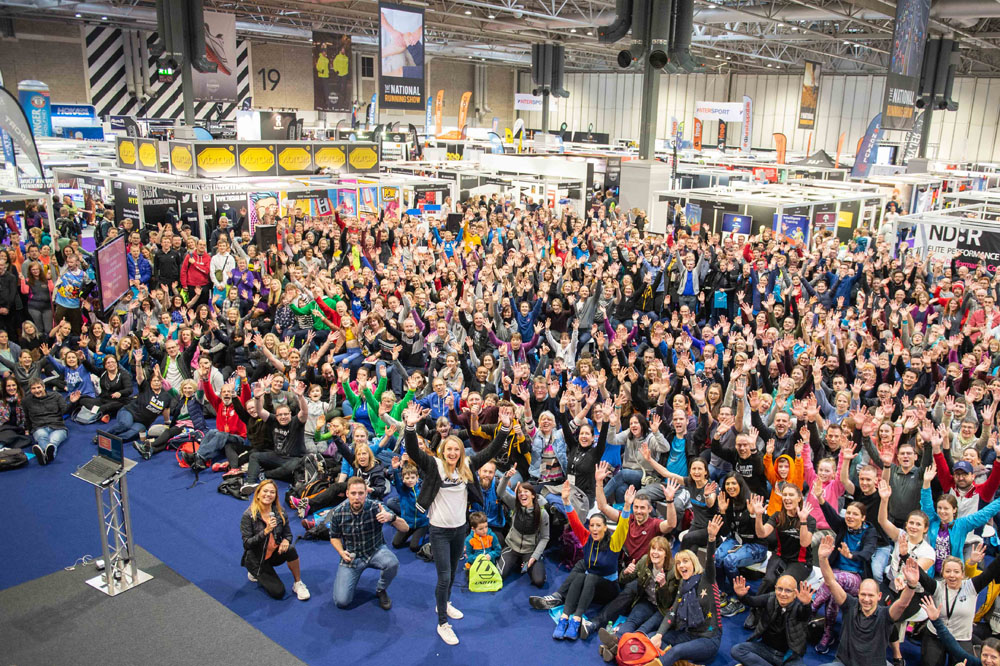 The day also saw more product launches among the 170 brands exhibiting at the show. In addition to an exciting display of new products from ASICS, New Balance, Polar, Saucony and On, The National Running Show was the perfect platform for CamelBak to launch its Women’s Ultra Pro Vest, with fittings and pre-orders taking place at their stand over the weekend. SKINS were also showcasing their latest, high performance DNAmic Ultimate compression range, while audio specialist Plantronics took the opportunity to feature two new top-of-the-range wireless sports headsets, the BackBeat Fit 3100 and BackBeat Fit 2100. There was plenty of nutrition inspiration too, with runner and chocolatier Carole Armitage launching her new chocolate range 80 Noir Ultra.

It was again the interactive feature areas that drew in the crowds and made the show a fun, participatory experience for all. Nutritionist Kate Percy performed a second series of live recipe demos in The Nutrition Advice Zone, another day of friendly competition and gait analysis took place over at The Treadmill Try Outs and the smart Testing Track sponsored by Intersport gave visitors a unique chance to trial footwear from the big brands. An expert team from SafeSize were also carrying out live gait analysis on the testing track and scanning runners’ feet throughout the day at Brilliant Shoe Discovery. 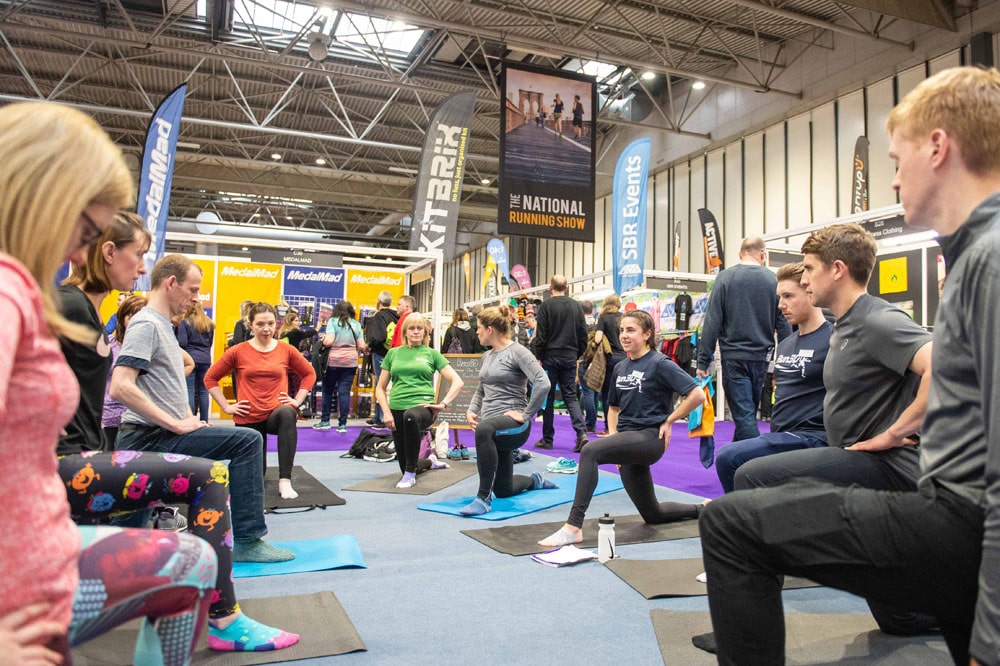 More activity continued at The Run Clinic where those who came laced up in running shoes took part in workshops on biomechanical analysis and dynamic movement skills. Places were snapped up for 3D gait analysis and sweat tests, while therapists advised on all manner of injuries at The Treatment Room and free strength and flexibility testing was offered at The MSK Clinic.

With all the kit, tech, nutrition, advice, inspiration and races that runners need to plan their running season, there was non-stop action at The National Running Show – yet The Run Café sponsored by Runderwear and The Running Bookshop sponsored by Bloomsbury provided a perfect retreat to refuel, spot a few running celebs and take it all in.

There’s no doubt that The National Running Show was an overwhelming success in its second year and that thousands of people from the UK’s running community went home feeling invigorated and uplifted. The show closed with great excitement at the announcement of dates for 2020 and sneak preview of the running heroes lined up for year three.

Mike Seaman, Director of Raccoon Events, commented: “As the doors closed on year two of The National Running Show, we couldn’t have been more delighted with the turnout and support from the running community as a whole. It has been a truly inspiring experience and a privilege to gather everyone together under one roof for a full weekend celebration of running. I would like to thank all our sponsors, partners, exhibitors and speakers for their support and expertise in delivering a first-class programme and contributing to the phenomenal success of the show. We wish everyone a superb year of running and we can’t wait to tell you more about our exciting plans for the 2020 event – it’s going to be awesome!”